DJI Mavic Air is over two years old now and it’s for an upgrade.DJI is announcing its successor the Mavic Air 2. It comes with a bigger image sensor, ditches Wi-Fi in favor of DJI’s own OccuSync transmission technology, has up to 34 minutes of flight time, and is packaged with a completely redesigned controller.

Mavic Air 2 pilots have the potential to capture up to 60fps in 4k and 240fps in 1080p and bit has been increased to 120 Mbps. Hyperlapse mode can shoot up to 8k. Combine this you capture great detail in HDR video standard.

DJI controller has also gone through a big change and looks a lot more like a Smart controller. It’s ditch the WIFI signal and has new transmission technology OccuSync 2.0 which has longer range connectivity up to 10km and creates a more reliable long-distance connection and enables the use of the DJI Goggles. The remote has an inbuilt battery 2600mAh which can also charge your smartphone while using.

DJI has continued to improve its object detection sensors and AI. Mavic Air 2 introduces DJI’s Active version 3.0 of DJI’s Advanced Pilot Assistance System (APAS), which detects objects and automatically reroutes the drone to avoid collisions. It uses a new version of 3D mapping for smoother transitions. DJI’s first consumer drone with AirSense technology that receives signals from nearby aircraft to warn the pilot about their approach. The maximum speed will remain the same, 68.4 km/h, but the maximum descent will be bumped up to 5 m/s.

The Increased battery size to a larger capacity with 3,500mAh.This increases the flight time to 34 minutes max (a significant jump from the 21 minutes that the original Air can last).

Mavic Air 2 body is larger and heavier than before, weighing in at 570g compared to the 430g of the original Mavic Air. 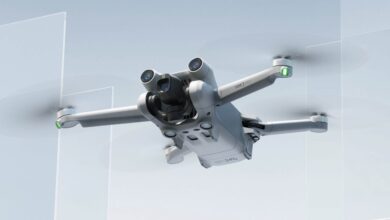